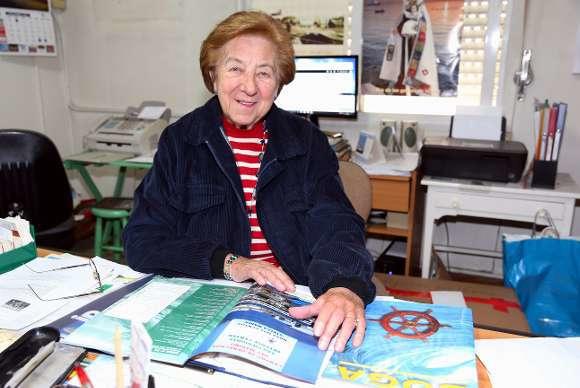 Cristina, a consecrated laywoman, a person of deep faith, fully dedicated to the service of God, devoted much of her life to the People of the Sea. She had a deep knowledge of their life and work.

Strong in character, she had no qualms about approaching a mayor, a managing director, or a minister in order to stand up for what she believed was fair.

Her activity was not limited to working side by side with the fishermen. She was also the driving force behind the fishermen’s wife’s association “Rosa dos Ventos”, which gave birth to the well-known Boga newsletter, a high-quality magazine, renowned for both for its articles and its presentation.

For years, she was the delegate of the Apostleship of the Sea for fishermen in Spain.

Always accompanied by Mari Carmen Grobas, they formed a tireless duo. They travelled through different fishing ports in Spain, with a similar zeal to that of Saint Paul, promoting Stella Maris, Apostleship of the Sea and upholding the rights and dignity of fishermen. Aware of the importance of defending the rights of fishermen beyond the Spanish borders, she even went to Brussels and there  had meetings with officials from the European Fisheries Commission.

Contacting fishermen’ wives from other European countries, especially from France and the Benelux, they created a European association, in order to have more strength in their advocacy for fishermen’s welfare.

She rejected conformity and considered that one could not become an Apostle of the Sea without a firm commitment to seafarers, fishers and their families and that the defence of their rights was an obligation that derived from it.

She was invited several times to the Vatican, by the former Pontifical Council for the Pastoral Care of Migrants and Itinerant People, to speak before bishops from around the world about the life and work of fishermen.

She was a beacon in the world of fishing.

She fought for control systems for working hours to be installed on deep-sea fishing boats and for the general improvement of safety and vacation periods for crews.

With constancy and without rest they worked as a team, Cristina, Mary Carmen and Ricardo Lion, from their office in Stella Maris, also attending to the merchant seafarers who came to them.

Even in recent years she promoted the Center for Seafarers’ Rights in the port of Vigo.

There was no space in her life that was not dedicated to the People of the Sea and their families.

Cristina, 85 years old, is now gone. God, who called her to serve Him among the People of the Sea, has now reclaimed her for His kingdom. There she will meet many people who loved her and especially so many fishermen who preceded her.

The name of Cristina will be engraved in the history of the Apostleship of the Sea, “Stella Maris” and in our hearts.