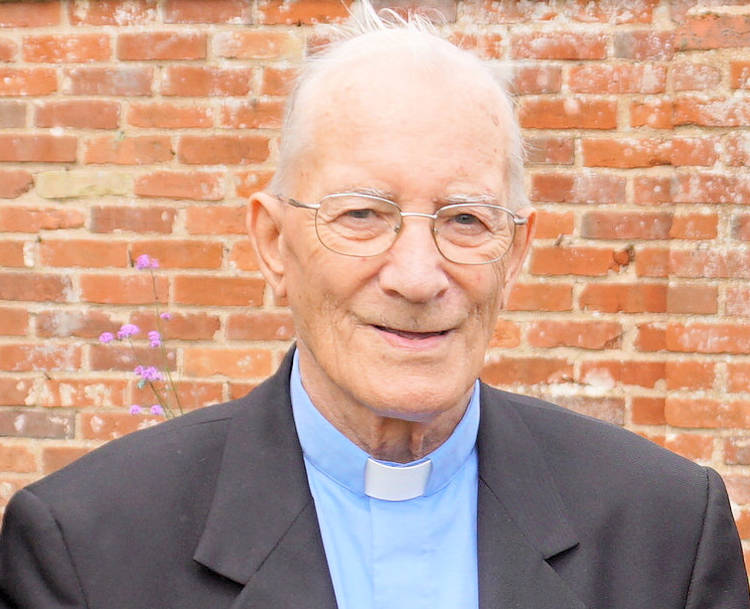 Canon Michael Hazell was a priest, originally from the Diocese of Northampton before retiring to the Diocese of East Anglia where he lived and assisted in Holy Family Church, Kesgrave, Suffolk.

He was greatly loved by all those had the good fortune of knowing him. He was a deeply religious and pastoral priest who had a great love for everyone. One of his ministries – which was very dear to him was the plight of the thousands of seafarers who arrive day in and day out at our local port in Felixstowe. Canon Michael was a very keen supporter of the work of Stella Maris. For many years he celebrated Mass monthly at the Felixstowe Seafarers Centre until he became unwell with cancer. The Mass was always attended by a faithful band of parishioners. When the seafarers could not attend Mass, their prayer requests, photos, messages, rosaries, and Holy pictures were there on the altar to remind all and for Canon Michael to bless. On one occasion, he climbed the gangway (3 stories high) to comfort a father whose child had died, 7,000 miles away in the Philippines. Another night, he held the hands and led a prayer for a distraught crew who had lost a shipmate in a tragic accident as they unloaded cargo.

His cheerfulness and smile would melt one’s heart. His homilies at Mass were simple and yet beautifully described the love of God for everyone. During his last months, even when he was very poorly in hospital, he never failed to ask about the seafarers when I visited him. He would also ask about the work of Stella Maris.

He was such a man of God, that his passing was a sad and great loss to his local parishioners at Kesgrave, Ipswich. It is also a sad loss to the many seafarers who had met him and he will be greatly missed by them.

They will always hold him dear in their hearts as he did during his ministry to them.

“The funeral will be a private celebration for the family only, but a Diocesan Requiem Mass for Canon Michael will be arranged when the present pandemic crisis is ended,” said Bishop Alan.